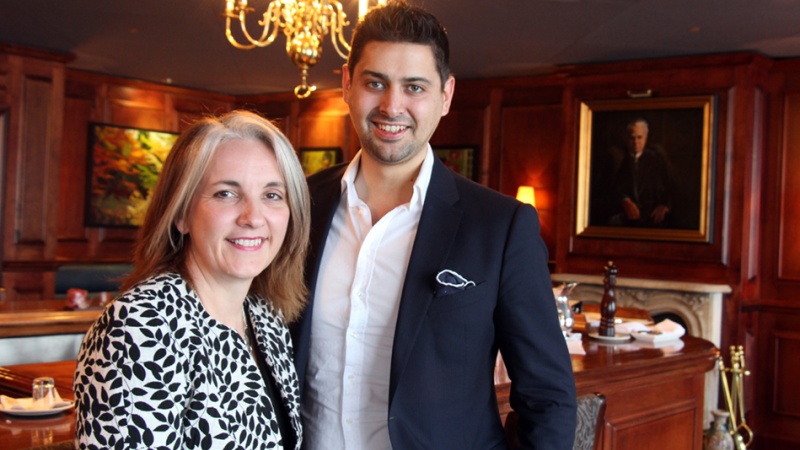 Above: The new general manager of the Rideau Club, Carol-Ann Goering, with member James Hanington. Photo by Caroline Phillips.

The venerable Rideau Club is looking to shake its reputation as a place for rich, old white men to convene by successfully attracting a growing number of millennials to what’s become the last private social club of its kind in Ottawa.

Not only is the number of people joining on the rise following several years of decline, but nearly half the new members who’ve joined over the past 18 months have been under the age of 40.

Founded in 1865 – two years ahead of Confederation – the prestigious club has always been regarded as a social hangout for Ottawa’s political and social elite. Its first club president was also our country’s first prime minister, Sir John A. Macdonald.

But times are changing, and so are private members’ clubs that are looking to stick around for the long term. The 152-year-old Rideau Club has been quietly reinventing itself as a relevant, familial space where men and women of all ages, ethnicities, professions and interests can connect.

“We used to be very much what we would consider a political club, with a lot of government officials and politicians,” says Carol-Ann Goering, who was hired eight months ago as the new general manager and chief operating officer. “We still have that group, but really we’re looking to be bigger than that, to reflect what Ottawa looks like these days.

The club has recently relaxed its dress code. Casual business attire – even denim – is now acceptable in some areas of the club.

“It’s not your grandfather’s Rideau Club,” says 34-year-old James Hanington, CEO of Stiff, an Ottawa-based strategic communications agency. He joined the club a year ago.

“This is not grey-haired old people falling asleep in wing-backs, although it’s a really nice thing to do if you have the time.”

For Hanington, the club provides him with an opportunity to meet other like-minded young professionals.

“It’s called a social club and it very much feels like that,” he says.

He’s particularly happy the place has become more family-friendly. He has two daughters, ages three and four, whom he brings with him on occasion. It nostalgically reminds him of his own childhood visits to private clubs with his grandfather, an admiral in the navy who survived a torpedo attack by a German U-boat during the Battle of the Atlantic.

Because Hanington’s home is in the south end and his office in the west end, he uses the Rideau Club as his downtown work base.

“It’s the calm; that’s what I love about this place,” he explains. “I have a crazy travel schedule and a crazy work life and I have insane children, so I have very few opportunities to come to places that are so calm and relaxing. It’s like a mini-vacation every time I come here.

“It’s also nice to come to a place that has a sense of formality to it, because not all millennials need to have bean-bag chairs and ripped jeans to feel like they’re part of something.”

The Rideau Club is perched atop the Sun Life Financial Centre at 99 Bank St. It’s one designated elevator ride up to the 15th floor, where a pause-worthy panoramic view of Parliament Hill awaits.

The club was at one time located on Wellington Street, across from Parliament, until a fire in 1979 destroyed the building. That’s the same year Jean Pigott became the first female member.

The club’s new strategic plan, unveiled in December, also identifies a need to update the look of the place.

“The members are so excited for change,” says Goering. “Even when we talk with the older demographic, they see the need.

“If the club is going to be around for another 150 years, we need to stay relevant, but we also need to do that while respecting the traditions and history that made us the outstanding club we are today.”

Not just anyone can join the Rideau Club. To be considered for membership, a person must be proposed and seconded by current club members.

One of the perks to belonging includes reciprocal club privileges at more than 150 similar clubs in 30 cities around the world.

The Rideau Club remains steeped in elegance and history, from its Yousuf Karsh meeting room full of famous portraits by the legendary photographer to its tale of a thwarted assassination attempt on Sir Wilfrid Laurier.

A disappointed office seeker from Rimouski, Que., barged into the club one day in 1897, brandishing a revolver and looking to kill the then-prime minister, according to historian Christopher McCreery’s commissioned publication, Savoir Faire, Savoir Vivre: The Rideau Club 1865-2015. The prime minister was luckily out of town that day and the would-be assassin was apprehended by a club member, but not before twice discharging his gun.

The Rideau Club currently has a membership of 760, plus spouses, but its goal is to reach 1,000 members by 2022. It’s never hit this maximum membership before, but it did come close a few times back in its heyday.

Sales director Ted Wagstaff has been getting the word out to young professionals that the Rideau Club is the place to be and that memberships are not as costly as one might think. The entrance fee is $500 for a person under the age of 40, followed by annual fees of $1,400. After you hit the big 4-0, the initial fee jumps to $3,000, with annual fees of $2,300.