By DIRK MEISSNER  The Canadian Press 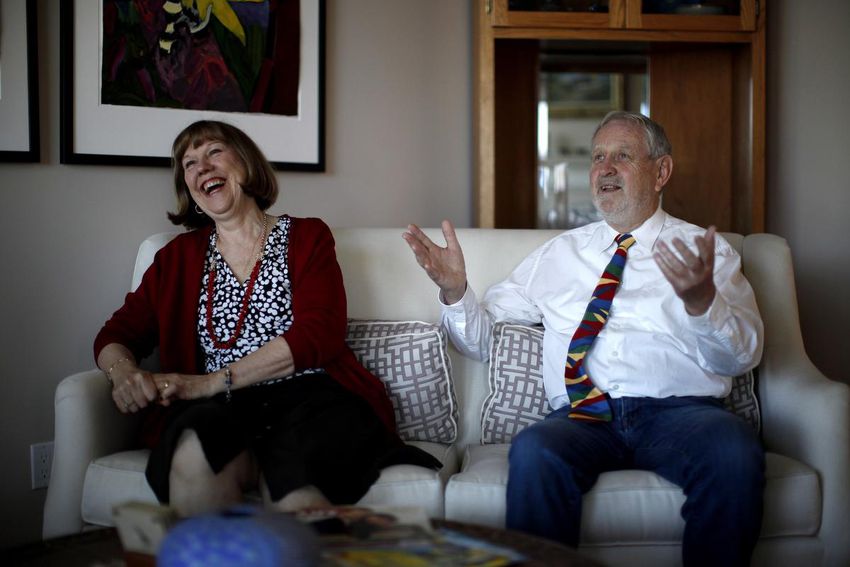 David Spence (UC Member) is the president of the Royal Commonwealth Society and organizer of a wedding reception being held on the same day as Prince Harry and Meghan Markle. His wife Donna Otto (UC Member) will be one of many Canadians who will wake up early to catch the royal wedding. “I’m going to enjoy every bit of it,” she says. (CHAD HIPOLITO / THE CANADIAN PRESS)

BRENTWOOD BAY, B.C.—Donna Otto hasn’t decided on wearing a fascinator or a new hat on Prince Harry and Meghan Markle’s wedding day, but she knows where she’ll be at 4 a.m. on Saturday when the royal couple say their “I dos.”

Otto, like most Canadians, is thousands of kilometres and many time zones away from the ceremony at St. George’s Chapel at Windsor Castle, but she says she’ll be up early in Victoria to toast the newlyweds.

Theatres, cathedrals, libraries, hotels and banquet halls across Canada are booked for morning wedding celebration parties, with the hearty souls on the West Coast rising before dawn for the noon-hour ceremony in Great Britain.

“I’m going to enjoy every bit of it,” says Otto, a member of the Royal Commonwealth Society’s Vancouver Island branch. “Embrace it. My dress is a work in progress. I’m sure I’ll have either a fascinator or I’m seriously thinking of getting a brand new hat.”

The Royal Commonwealth Society and the Victoria chapter of the Monarchist League of Canada have teamed up to host a royal wedding breakfast buffet bash at the city’s 139-year-old Union Club.

Guests are invited to arrive at 3 a.m. They should be dressed in appropriate wedding attire, where they’ll watch a live television broadcast of the wedding.

“I call it fun, frivolous and foolish,” Otto says. “Why not? Sometimes life is too serious and we just need to … interject something that’s really fun to do. It’s an opportunity to focus on something very positive and that part of it is wonderful because there is such negative news in the world all the time.”

Wendy Hart says she’s excited about the wedding, but staging a viewing party at 6 a.m. in Winnipeg wasn’t generating much buzz.

Instead, the Manitoba wings of the Monarchist League, United Empire Loyalists and Royal Commonwealth Society will gather at noon Central time for a champagne luncheon to view the wedding on tape delay at the castle-like University of Winnipeg Club, she says.

“People were not that keen to get up that early in the morning,” Hart says. “It’s going to be so pleasant to watch it at a reasonable time of day.”

She says Prince Harry and Meghan have captivated millions around the world with their love story and the bonds they created.

“It’s not just a royal wedding,” Hart says. “It’s a union involving North America and the United Kingdom. We’re crossing the ocean on this one.”

In Toronto, where Harry and Meghan’s romance blossomed, a 7 a.m. viewing party is being held at the Duke of Cornwall pub, which has room for about 160 people. Participants will watch the ceremony on television, feast on English-style breakfasts and participate in a royal trivia quiz.

“Our event is a mixed bag,” he says. “We’re getting older people who have been following all the major royal events for years and there’s these young people who are excited for Harry and they’re excited for Meghan who lived 20 minutes down the street.”

Markle resided in Toronto for several years while filming the television series Suits.

You’ll find festivities east of Ontario too. The historic British restaurant Bar George in Montreal is hosting a viewing party, complete with platters of scones and sandwiches. The Delta Halifax in Nova Scotia is hosting a breakfast spread with their live screening.

At his Brentwood Bay home, just 20 kilometres northwest of Victoria, Spence, who performed the wedding ceremony for Paralympian and activist Rick Hansen and Amanda Reid, says he’s become enamoured with Harry and Meghan and what they represent to the world.

“People are infatuated with a young couple who reflects the diversity of what the modern Commonwealth is all about,” says Spence, who is the Vancouver Island president of the Royal Commonwealth Society.

“They have an energy level they are sharing with the world. They’ve gone through some difficult parts of their lives in order to reach this level of identity with people.”