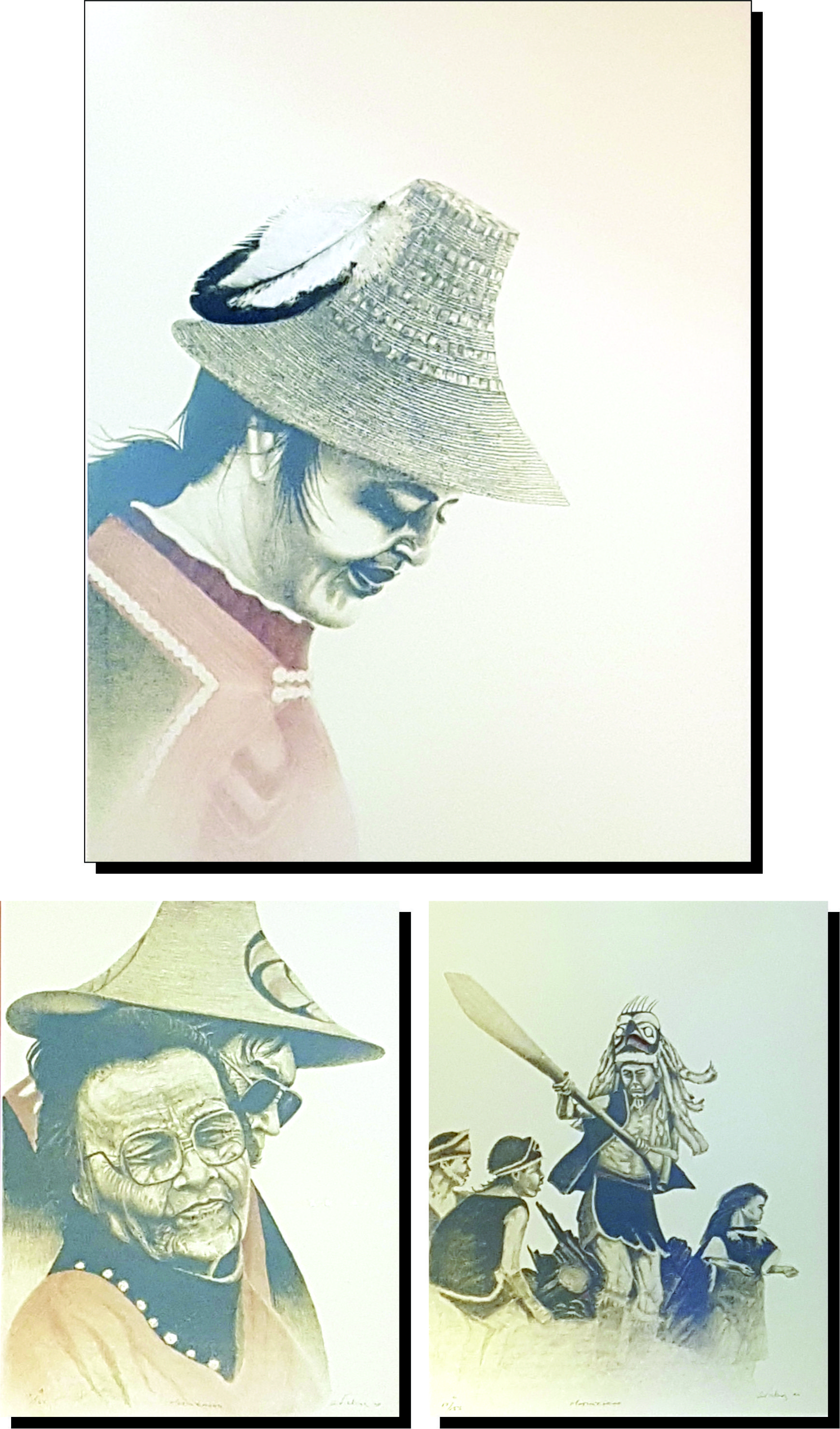 In 1993 Arthur Vickers was asked by the directors of Grace Hospital to create a work of art that would embody his feelings about the hospital where he was born. His devotion to the hospital runs deep: “My mother’s name was Grace, and my wife Jessica and I were both born at Grace Hospital,” said Vickers.

“The idea of coming up with an image that could help Grace Hospital fundraise was an honour for me,” he said. Vickers spent one year sketching ideas and contemplating how he would portray “Motherhood,” which is what the hospital symbolized for him. The suite of three hand pulled serigraphs “are a tribute to all mothers. To my mom, to my Aunt Jane, to every mother.”

Vickers inspiration for the three-part limited-edition fine art print suite was a meeting of First Nations from across the Northwest Coast at Bella Bella in 1993. “There were literally thousands of people at the gathering. I saw a young man doing the paddle dance and teaching some children how to do it. There was a little girl who was dancing beside him with her hands held out. She got tired, so she stopped dancing and started looking for her mom. Crying and distraught, she ran across the field,” recalled Vickers. “She then tapped the lady next to me on the thigh. Even in the midst of all the commotion, the dancing, and the fires, the woman’s attention became totally focused on her child. That’s motherhood.”

“My aunt and uncle were also there. They were happy to see their culture being passed to the next generation. They were the inspiration for portraits of the elderly couple in the first print ” explained Vickers. Arthur spent a few months every year living with his aunt and uncle while he was a child, referring to them as his “summer parents.” The woman’s heavily lined face is gazing contentedly upon her daughter. Behind the elderly woman is her husband, who had supported her through all of her years as a mother.

The second work in the suite features the portrait of the mother, a subtle smile of contentment and deep happiness on her face. “You see that look so often when a mother’s attention is 100 per cent focused on her child. I remember my own mom looking down on me like that,” explained Vickers. “It’s the essence of motherhood. She is in her regalia, with her head bent down looking at the baby or child you don’t see. The mother imagines her child growing up learning her family’s culture and history,” he noted.

All three works of art feature elements of the eagle. Each one is drawn with depth and texture; they look startlingly real. “The eagle feather is something I’ve done for years,” said Vickers. “My mother was adopted into the Eagle clan, and I’m a member of the same clan.”

Grace passed away in 1995 one year after the “Motherhood” suite was completed. “Now this art is a remembrance of my mom who has passed on,” he said. “Her passing taught me a lot. I started to think, ‘What have I done?’ There’s an element of fear or urgency, whatever it is. It’s hard to think of your mom not being there, no matter what your age is.”

The “Motherhood” suite is intensely personal for Vickers, as they are his only works of art where his family members are the models: “I think with my heart rather than my head. It was emotionally challenging using the subconscious and conscious elements at the same time.”

“I’m really grateful for the opportunity to have done this,” said Arthur. Drawing on the richness of his First Nations culture, he concluded: “The grace of our ancestry is giving.”

In donating some of his most personal works of art to support Grace Hospital (now British Columbia Women’s Hospital & Health Centre), Arthur Vickers has completed the circle of grace.

View the Arthur Vickers print “triptych”, Motherhood: Dedicated to Grace, on the wall of the reading room, facing you directly as you walk in through the main entrance doors. The Club is proud to have Arthur and Jessica as non-resident members who often stay at the Club when they are in Victoria. See more of Arthur’s work on display at the Arthur Vickers Art Gallery next time you are in Cowichan Bay.