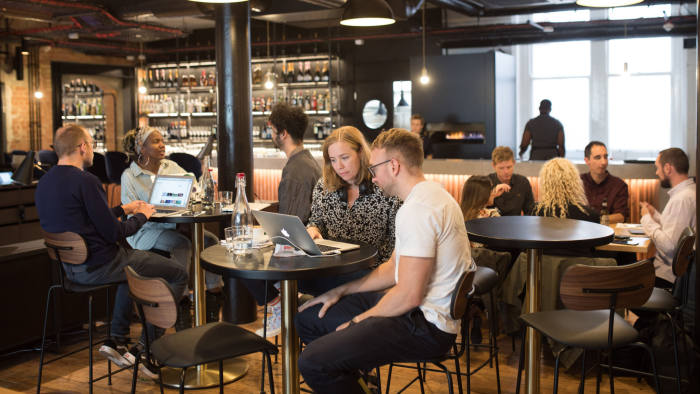 Soon after the launch of London’s lavish private members’ club 12 Hay Hill, its boss Stephanos Issaias had to throw out all the sofas and chairs on one of the floors and replace them with less comfortable seating.  Unlike many traditional private clubs, 12 Hay Hill allows members to mix business and pleasure: laptops and smartphones are permitted in its lounges, luxury serviced offices are available to rent.  But some of its members, who today pay £3,800 a year for the privilege, had complained that the comfy sofas that were perfect for reclining with a drink or a book, were not appropriate “for holding meetings”, according to Mr Issaias.  Such are the dilemmas faced by a new type of club that is springing up in the UK capital. Dubbed “club-working” spaces, these offer the exclusivity and social networking of the City clubs of old, combined with the work-friendly environment of WeWork, the $20bn shared office provider.  The rising popularity of working in places other than traditional offices has been driven by IT that has made it ever easier, and the growing cost of space in London.  Rising rents have made it more expensive for businesses to offer an upmarket front-of-house for entertaining guests. Meanwhile, sole traders and start-ups have been reluctant to sign long leases, spawning a “shared office” boom: London is now the world’s largest market for serviced offices, with an estimated £16bn of space in 2017, according to Capital Economics. “Technology was the enabler in the sense that people were not tied to a big desktop computer — or even a laptop with a cable,” said Mr Issaias. “Clubs now see an opportunity to maximise their earnings.”

Many traditional clubs, such as those in London’s St James’ area, have always discouraged working on their premises, preferring members to socialise over their Michelin-starred food and their well-stocked bars. Even at Soho House, a relatively new chain of clubs that targets members from the creative industries, rules dictate that “members may not take or make phone calls and phones should be in silent mode”. But new models that disregard this separation are coming to life in many forms: in some cases, established clubs are relaxing their rules, while others, like Marylebone’s Home House, are launching specialised affiliates. Others, such as 12 Hay Hill, Devonshire Club, Mortimer House and The Conduit, have been created from scratch.  Even serviced offices companies are branching into the market. Two weeks ago, IWG, the world’s largest serviced office group, announced that it was renting 40,000 square feet in London’s Battersea Power Station development to launch a private club. The trend is also catching on outside the UK. In the US, city clubs such as Jonathan Club in Los Angeles and New York’s The Union League Club “have been adding co-working areas into their interiors and updating their look to make it more modern” in a bid to attract millennial professionals, according to Zack Bates, chief executive of Private Club Marketing, which promotes clubs and hotels.

The hybrid club-working model is not for everyone

Many London projects have grown rapidly. The Ministry, a private club near London Bridge that markets itself to the creative industries, opened in July and has already filled about 500 of the 803 fixed desks it has on site, on leases of at least three months. The club is an offshoot of the Ministry of Sound record label and nightclub and one of the services it offers is a sound system that plays music designed to facilitate concentration.  Simon Moore, The Ministry’s creative director, says there are major benefits to being an exclusive brand. “As a smaller organisation we can be flexible and adjust and [make changes] quickly,” he said. “You can’t do that as a WeWork.” North of the Thames near Bond Street, Home House, the social club that has had Madonna and Sean Connery as members, is launching a private club for entrepreneurs from March 2019. According to managing director Andrew Richardson, Home Grown will be “highly selective”, only accepting members whose firms are growing at 20 per cent a year — in sales or staff numbers.

“We want to offer the remedy for growing pains that entrepreneurs have when they are at a high growth stage,” Mr Richardson said, adding that Home Grown will cost £2,000 a year per member, or £1,500 for founding members, and is targeting 3,000 members in total. For customers, the set-up can be cost-effective. Hossam Alsaady, managing partner of Above Wealth, a wealth advisory business for the very rich, decided to rent space at 12 Hay Hill, having previously rented an office in Mayfair that included several meeting rooms.  “Having a couple of meeting rooms in Mayfair and having it empty 98 per cent of the time was crazy — I was paying a lot of money,” he said, adding that he has “developed a couple of good relationships by being in this common working area”. Mr Alsaady, a former managing director at HSBC Private Bank, now has plans to invest in the club-working industry. “It’s going to continue to grow,” he said.  Still, this hybrid club-working model is not for everyone. “Some clubs have started taking a more lax view on members overtly working in their premises,” a spokesperson for 5 Hertford Street, a Mayfair members club, told the Financial Times. “But actually being on the laptop and taking work calls isn’t conducive to a relaxed atmosphere for those who are there just to have fun.” Insiders warn that the business model can be difficult to get right. It differs from that of traditional clubs, which rely heavily on revenues from food and drink; instead, members need to feel able to have just a cup of coffee in the lounge while staying and working for several hours. This can mean raising prices: 12 Hay Hill has more than doubled its membership fee from the £1,800 a year it charged when it launched in 2015.  Others note that the market is becoming increasingly saturated.  “There are new entrants all the time,” said Adam Blaskey, founder of The Clubhouse, which provides meeting rooms in London for big companies including Morgan Stanley and BP and recently opened a fourth branch in Holborn.  “What’s important is that your product is clearly differentiated in an already-crowded market . . . There’s bound to be some consolidation,” he said.