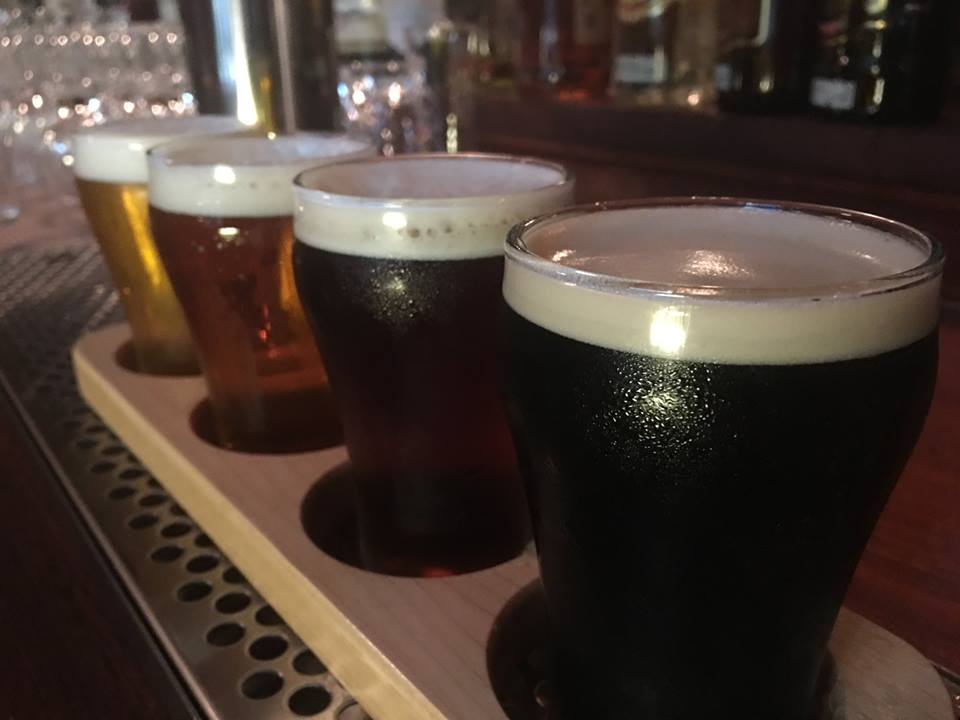 Beverage Manager Richard Delwoski is pleased to announce that flights of beer are now available at the Club!

“Ever since my first introduction into the wonderful world of beer flights I’ve been hooked. In my opinion there is no better and easier way to cover a lot of tasting ground then through a beer flight or two”, says Delowski.

The Club’s Flight features 4x 6oz pours, and you can choose any 4 from the Club’s choice of 12 tasty treats on tap, including (listed alphabetically):

CRY ME A RIVER (Driftwood Brewery – Victoria, BC) – Brewed in the tradition of the artisan brewers of Leipzig, this rare style wheat beer is named after the Gose River in Lower Saxony, Germany. This style went extinct twice, but is now enjoying a revival in Germany and around the world. Dry, tart, citrusy and deliciously refreshing, our Gose is perfect for a hot summer’s day.

DARK MATTER (Hoyne Brewing Co. – Victoria, BC) – pours a deep chocolate brown colour with a thick and frothy head.  This beer smells of a chocolate and nut with a solid malt base and a touch of northwest hops to go with it. The taste starts off very smooth and light then a chocolate flavour starts to take over. This chocolate taste melds into a strong coffee finish that leaves the mouth waiting for more.

ELECTRIC UNICORN (Phillips Brewing & Malting – Victoria, BC) – this mono-horned laser beast has sweet banana and fruit flavours, and is balanced against a citrus hop background that finishes dry.

FAT TUG IPA (Driftwood Brewery – Victoria, BC) – brewed with the hop aficionado in mind, Fat Tug is a Northwest-style India Pale Ale, with an intense hop profile featuring notes of grapefruit, mango, melon and passionfruit. Sufficient malt is there to provide support. This beer delivers on the promise to satisfy anyone with a thirst for all things hoppy!

FLAGSHIP IPA (Steamworks Brewery – Vancouver, BC) – at last this steam-powered flagship has sailed into port. This Northeast style IPA is generously hopped with Mosaic, Galaxy & Citra and pours cloudy with an intense juicy, tropical fruit aroma that gives way to a balanced bitterness. Steamworks Flagship IPA is a confident and powerful brew perfect for discerning hop-heads and casual drinkers alike. This Flagship IPA recently picked up Gold for North American IPA as well as Best in Show from the 2016 BC Beer Awards.

It could have been called a bevy of beer, an army of ales, a leap of lagers, or a raft of brews (which would have been clever seeing as the tray a beer flight is commonly served on is called a paddle), but no, it became known as a beer “flight.” Why? A closer look at the word flight might give us some clues.

Flight, meaning a sampling of a certain food or drink, doesn’t seem to be in use before the late 1970’s. There are two distinct and separate “flight” nouns. The older of the two means “the act of flying through the air.” The newer noun which has a different origin than the first is defined as “the act of running away.” The likeliest source of the word’s use, in the context of “a sample of something,” stems from a definition of the first usage, stated in the Merriam-Webster dictionary as, “a group of similar beings or objects flying through the air together.”

It’s interesting to note that a connection could also be made, especially in the case of beer, to another definition of the same flight noun, that of, “a series, resembling a flight of stairs.” A beer flight is usually drank from lightest to darkest (we will explore this more in a moment). As you work your way “up” the color spectrum in a beer flight it isn’t hard to imagine each sample as a step, and the whole as a flight of stairs.