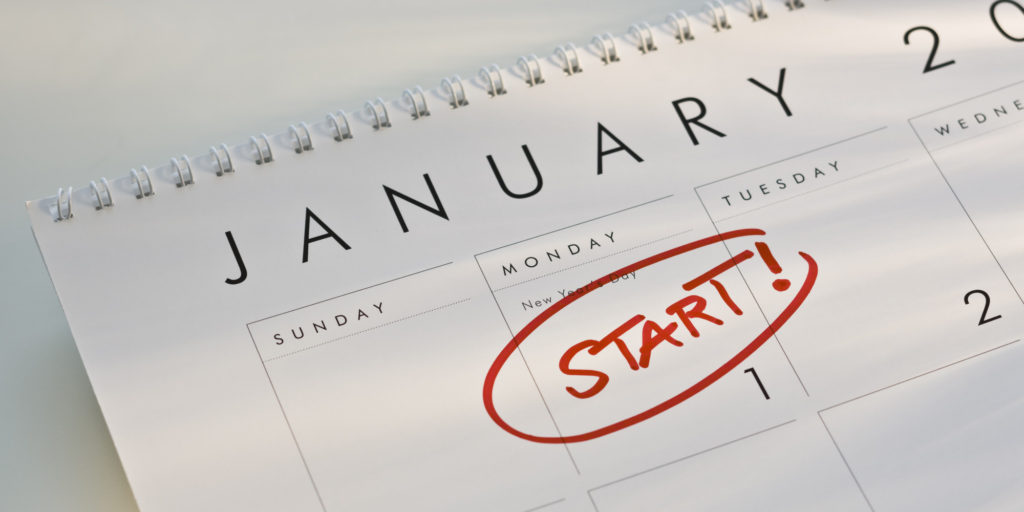 If you’re feeling a bit pickled after a month of holiday celebration — or just prefer to keep your drinking to a minimum, regardless of season — take heart: It’s an especially good time to be a teetotaler. Across the country this year, restaurants are beginning to respond to the vogue for “dry January” or “Drynuary,” the practice of starting the year off free of alcohol. (Its adherents swear by the practice’s benefits: a reset for weary livers, incidental weight loss, better sleep and, perhaps, the feelings of accomplishment and reassurance that attend proving to oneself that taking a month off drinking is possible in the first place.)

Thankfully, with increased demand come better offerings. Gone are syrupy Shirley Temple variants and lazy, tequila-free margaritas; mixologists are instead giving alcohol-less options the same care and attention they do to their standard cocktails. That directive has been facilitated by the stateside arrival last year of Seedlip, a nonalcoholic spirit distilled like liquor in either spiced or botanical variants, which originally debuted in London in 2015.

Here, bartenders and beverage directors across North America — many of whom are introducing full drink menus at their restaurants this month — share alcohol-free cocktail recipes for those observing dry January. (Those who don’t drink all year round are, of course, equally welcome to enjoy them.) A word to the wise: avoid the word “mocktail.” Try calling them “zero-proof” instead. 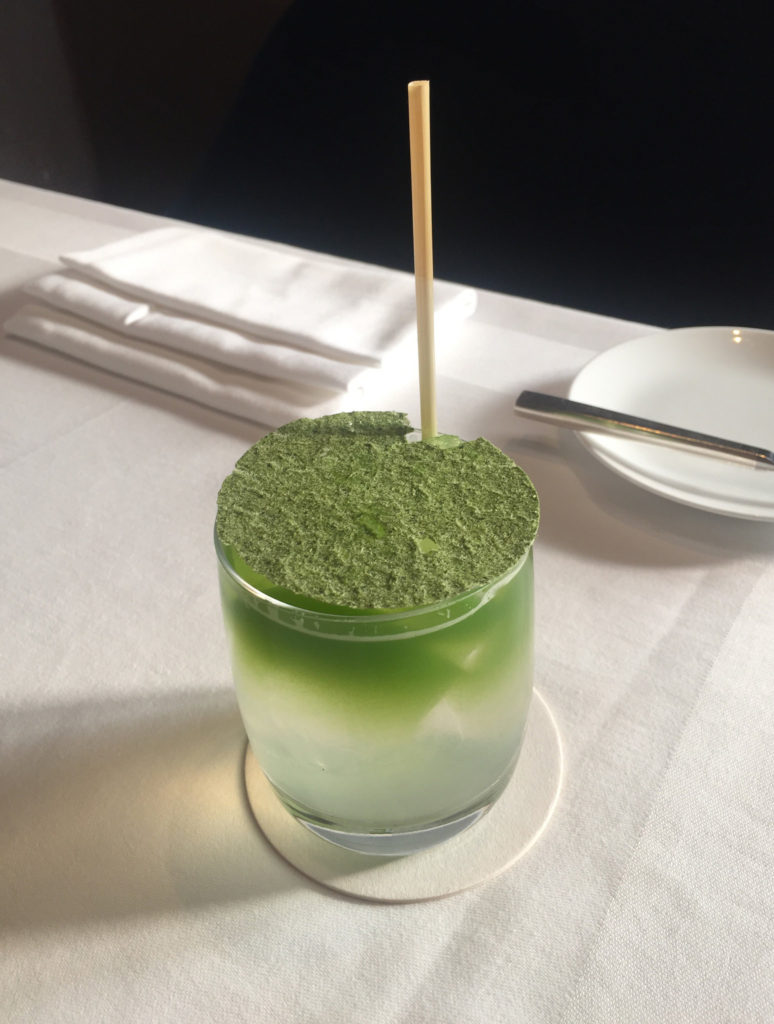 Dry January represents well-worn territory for Kim Stodel, the bar manager at Providence, a Michelin-starred restaurant whose inventive nonalcoholic cocktail offerings are almost as popular as the boozy ones. “I think every bar in the world should offer something for people who choose not to drink,” he says. “Being a slinger of booze, I’ve become very sensitive to the effects of alcohol on people and believe it’s my responsibility to offer alternatives while doing so. At Providence, we have a special section on the cocktail menu entitled ‘For those who don’t partake.’”

Stodel is also known for his “zero-waste” cocktail program, which aims to work in tandem with Providence’s kitchen to reimagine a new liquid life for produce that would otherwise end up as food scraps. The Sea Cucumber drink repurposes leftover cucumbers that were first used in a sashimi-style dish at the restaurant. “The cucumbers are salted and then a tiny melon baller is used to cut out small perfect orbs of delicious cucumber for the dish,” Stodel says. “What’s left is mine, which is to say, salted cucumbers with holes in them.” He blends them and uses both the juice and the pulp to make the cocktail.

Method: Serve ingredients shaken or built, in a single rocks glass. To make the salted cucumber juice, take the salted cucumbers and put them in a blender on high for about a minute until everything has liquefied. Then strain the mixture through a fine strainer; you’re left with a vibrant green cucumber juice and cucumber pulp. The juice will be used to top the drink. If you’re feeling adventurous, use the pulp, too: At Providence, it’s seasoned and fortified, spread on a silicon mat and dehydrated to make a chip to garnish. 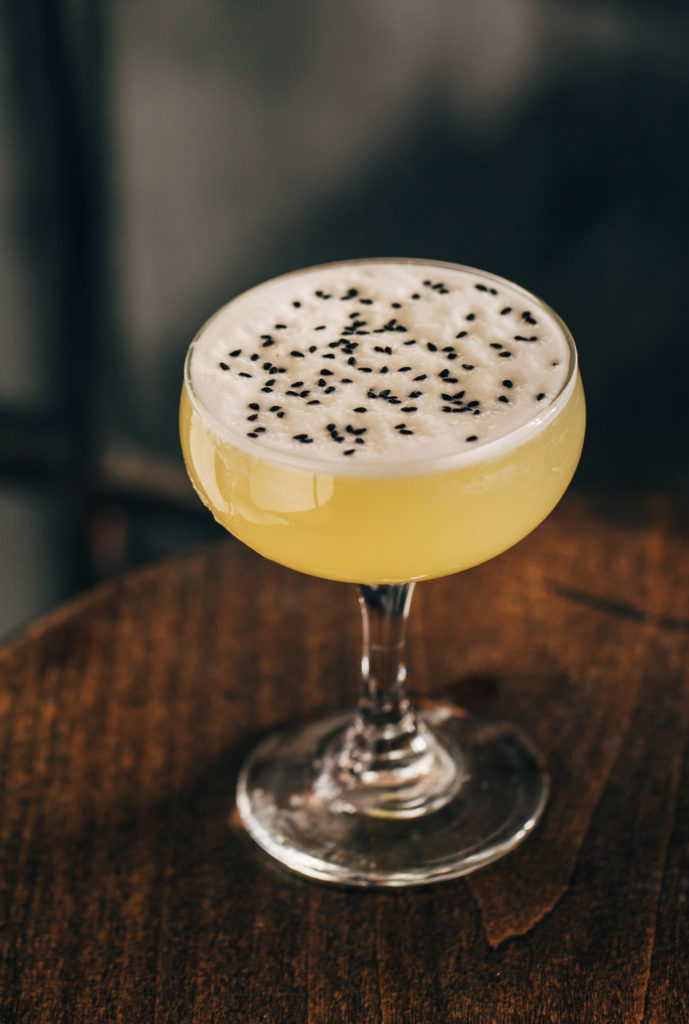 This month, Lower Manhattan’s best-loved British restaurant is featuring a new menu of five alcohol-free cocktails: takes on two classics (a Martini and a “NOgroni”); two “cameo” drinks by guest bartenders (including a honey-and-kefir concoction by Sam Anderson of Mission Chinese); and a new special, the Celery Sour, created by the mixologist Victoria Canty and Natalie Freihon, the restaurant’s managing partner.

“Victoria and I wanted to include aspects of wellness in the drink, not just have something that looked and acted like a cocktail without alcohol,” Freihon says. “We did want guests to feel like they were drinking something thoughtfully crafted, and vegan to go along with our January menu. So, we used aquafaba instead of eggs as the foaming agent.”

The Garden Sour (pictured above)

Method: Pour all ingredients into a Boston shaker. Dry shake (without ice). Add ice (enough to fill small side of cocktail shaker) and shake until frothy. Double strain into an 8-ounce coupe using Hawthorne and mesh strainers. Garnish with Nigella seeds. 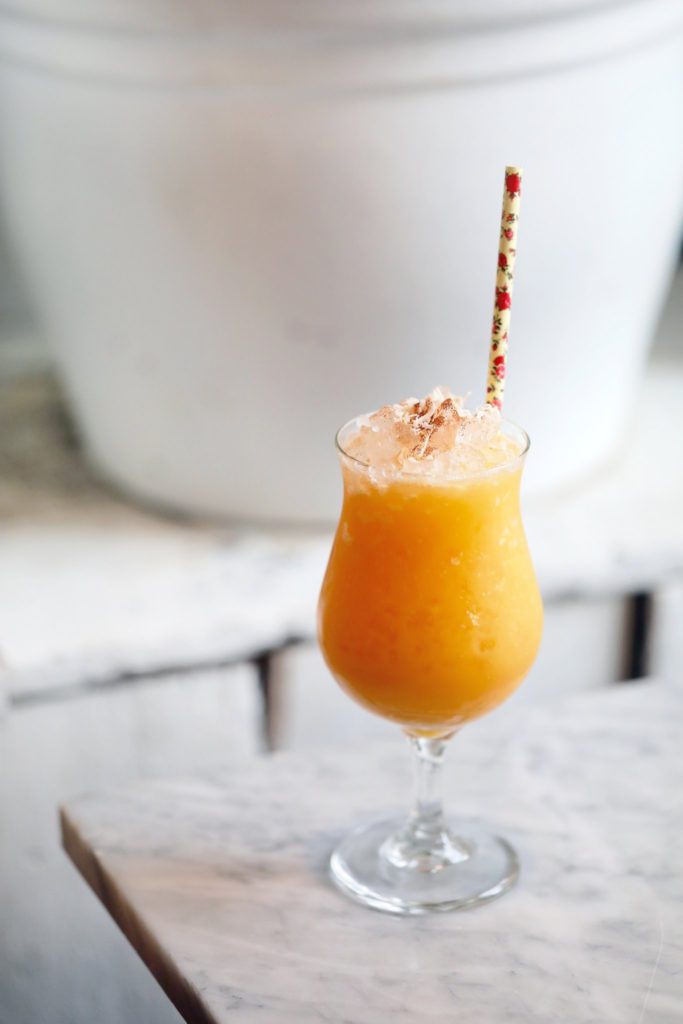 Claire Sprouse, the bar manager at Sunday in Brooklyn, was inspired to modify the recipe for the restaurant’s popular Golden Coconut cocktail after trying Seedlip Spice. “I love that this is a product made deliberately and thoughtfully for the zero-alcohol-by-volume crowd,” she says. “Oftentimes, nonalcoholic cocktails are just made with leftover syrups and juices that happen to be laying around the bar. This product adds complexity without necessarily adding sweetness or citrus.” The nonalcoholic version, called the Coco Squash, is available this month.

Method: Combine ingredients and shake with ice. Pack into glass and garnish with coconut flakes. 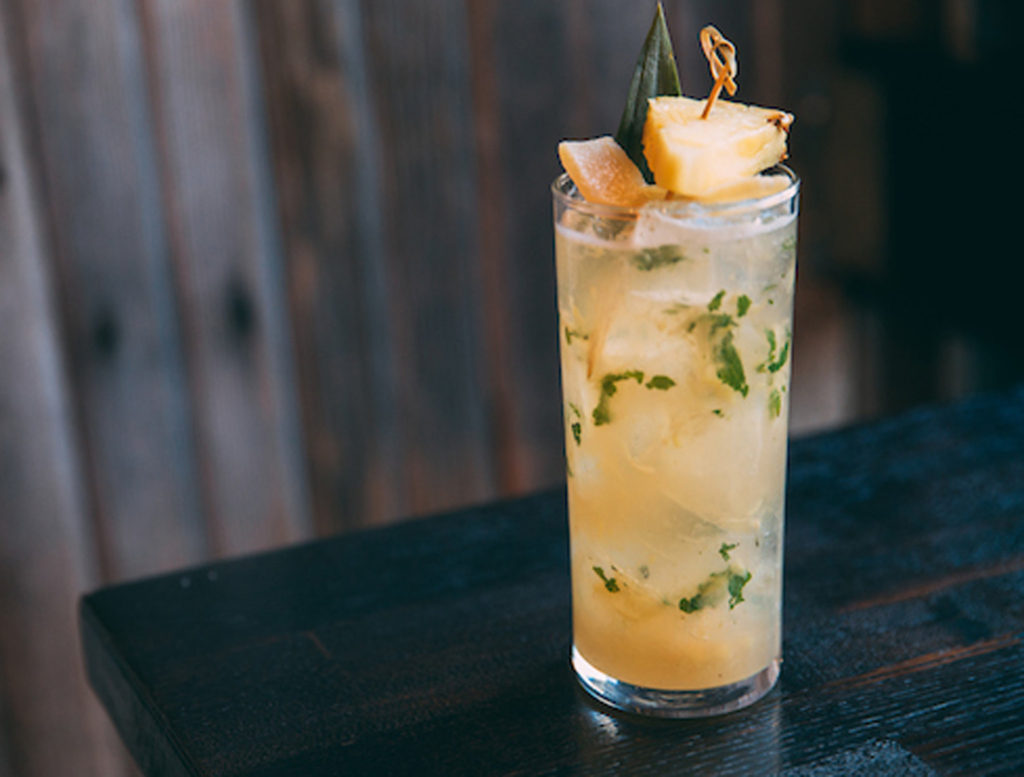 “The struggle of taking menu ‘real estate’ up with a zero-proof area is a gamble,” concedes Christina Smith, the beverage director of Oyster Bah, a rustic New England-style seafood shack in Lincoln Park. “However, we are in the business of hospitality, and being able to accommodate a guest’s request when they point to one of our cocktails and say, ‘Can you make that with no alcohol?’ — and being able to deliver something that may be even better without hesitation — is something special.” The restaurant’s Pineapple Ginger Mojito will join several other nonalcoholic cocktail offerings on the menu this month.

Method: Served in a Collins glass. Combine all ingredients, shake, strain, pour and top with extra ice and a splash of soda. 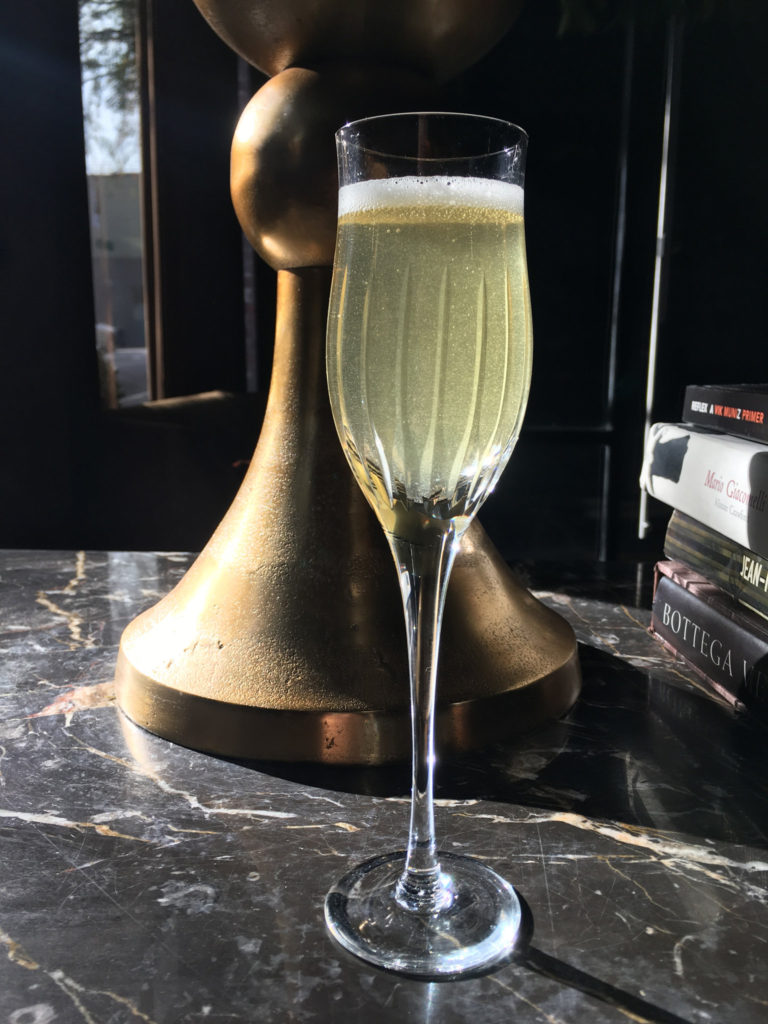 “I’ve always been excited when there has been a request for a nonalcoholic pairing,” says Michael Kudra, the lead bartender at the triple-Michelin-starred Quince. “I love bringing someone down the rabbit hole of how interesting it can be to pair drinks with food.” For January 2018, he is introducing four ambitious new zero-proof options to Quince’s cocktail menu: twists on a granita and a gin and tonic; a Chinotto sweetened with wood syrup; and, below, a buckwheat tea that, once infused with carbon dioxide, bears a striking resemblance to Champagne.

For the buckwheat tea:

For the lemon foam:

Method: For the buckwheat tea base, infuse the soba-cha tea with hot water for two to three minutes or until texture and color resemble that of a glass of Champagne. Place the tea in an ice bath and stir to cool evenly. While stirring, add simple syrup and a pinch of salt. Once the tea is slightly above room temperature, carbonate it with a CO2 charger. For the lemon air, combine all ingredients and blend in an immersion blender. Serve the buckwheat tea in a Champagne flute and top off with lemon air. 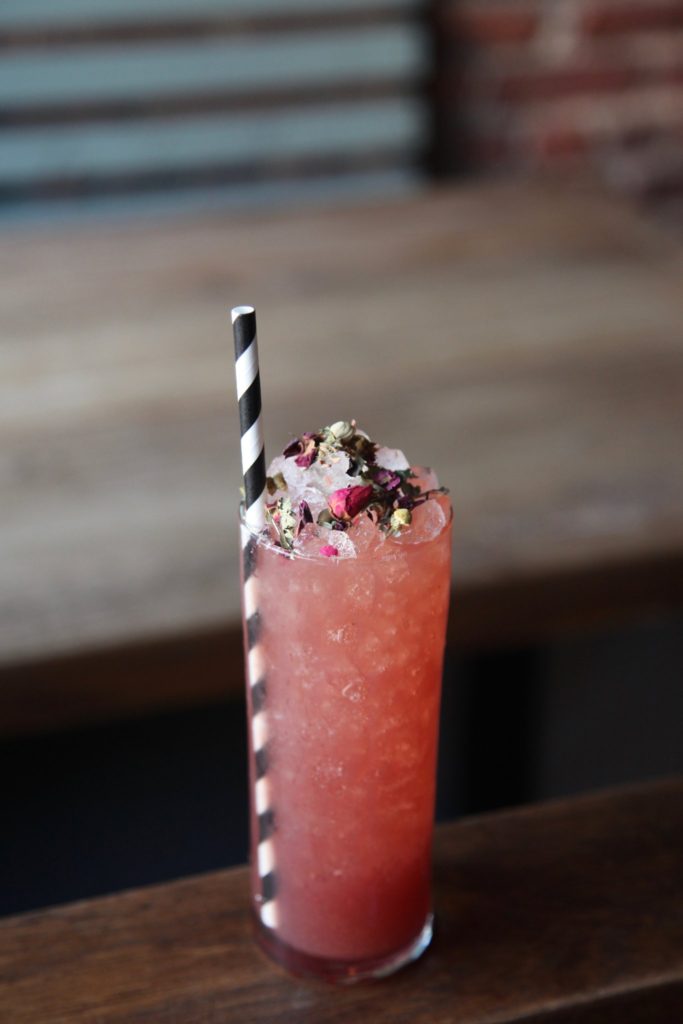 Mike Di Tota, the bar director at the Bonnie, made a concerted effort to ramp up the gastro pub’s alcohol-free offerings after his wife gave up drinking several years ago. For Dry January, the bar will supplement its usual zero-proof cocktail list with a special drinks menu called “Easy Does It.” One adventurous offering is the Baker’s Dozen, which is built on a blackberry-fig gastrique. “Vinegar is a traditional natural cure-all, and I love its flavor. I’m a big fan of kombucha, and I drink a tablespoon of apple cider vinegar in a glass of water first thing every morning to stimulate my metabolism and to wake me up,” Di Tota says. “In the Baker’s Dozen, we combine white balsamic vinegar with fruit preserves to make it more drinkable in a cocktail; it opens up your palate and adds a deep, funky layer of flavor to the drink.”

Di Tota, a graduate of the New York Botanical Garden School of Professional Horticulture, puts particular emphasis on inventive use of herbs, spices and produce; Haber’s, the tonic used in the Baker’s Dozen, is a small-batch product rich with botanical flavor. (And it’s a hometown favorite — it’s produced in Astoria, Queens, not far from the Bonnie.)

Method: Combine first three ingredients in a highball glass and fill with ice. Top with soda water. Stir to mix. Garnish with a sprinkle of dried tea leaves and buds.

Method: Blend until smooth. Strain and discard pulpy solids. Store in a covered container, refrigerated, for up to one week.