Douglas Magazine talks to Steve Wallace, the ex-politician/driving instructor/sports fanatic/entrepreneurial whirlwind who says what he thinks, damn the torpedoes, and, as the owner of Wallace Driving School, says he’s in the business of saving lives. 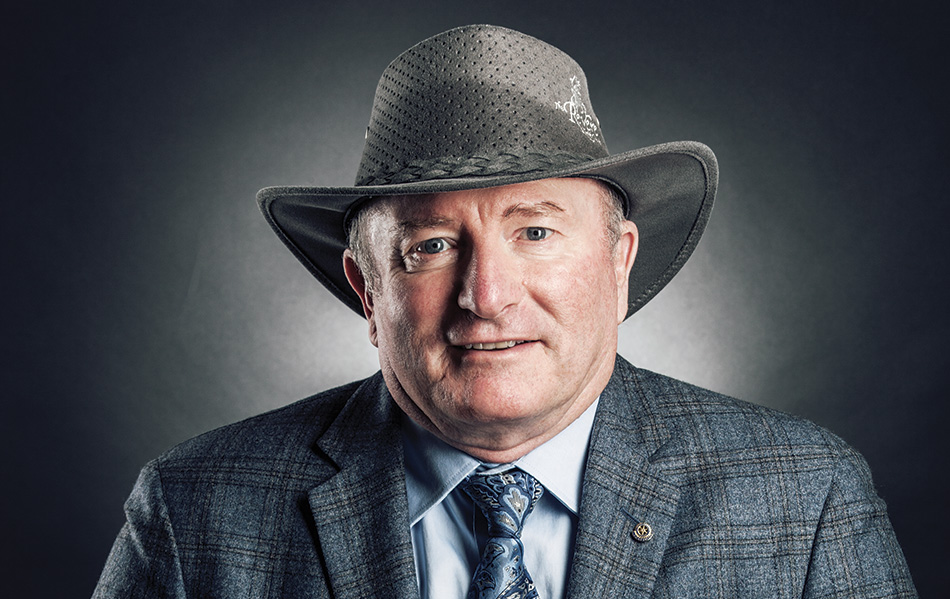 (Union Club member) Steve Wallace sports a wide-brimmed hat, a blue windbreaker and a grin as we set out in a car bearing the logo of Wallace Driving School.

We stop in Esquimalt where his student, a Syrian refugee, lives. The young man, Jawdat Belal, is one of more than two dozen Syrians getting lessons from Wallace. The instructions are free for heads of privately sponsored refugee families.

“Signal right and show me how good you are, and don’t scare the heck out of Jeff, right?” he tells his 17-year-old student as we head out.

Wallace’s trademark hat, to say nothing of his constant wisecracks, gives him a bit of a cowboy air, perhaps befitting someone who rode in from the Cariboo a decade ago to relaunch his business in B.C.’s capital city. He’s been a driving instructor for more than 40 years, starting in Quesnel’s school system (he’s a certified teacher) and then setting up his own business, which now serves Victoria and Vancouver Island. He’s also well known in political circles, having served as mayor of Quesnel from 1990 to 2002, as president of the Union of British Columbia Municipalities (UBCM) and even once running provincially for the B.C. Liberals.

Today both Wallace and his vehicles with their bright-green logos are familiar sites around Victoria.

“He’s the best,” Belal says of his instructor. “I feel good, yeah. It’s very nice since I start driving with Steve. I’ve started to get better and better.”

Belal hopes to get his driving licence to help him attend classes at Camosun College. Looking serious, he says little as he surveys the road and traffic conditions, hanging on every word from Wallace.

“No one-hand stuff,” Wallace chides him. “Don’t give me that Syrian [driving] stuff. Give me the old Canadian stuff. Look back. Now bring it back … more, more, more … and stop. Pretty good.”

And so it goes. In a one-and-a-half-hour lesson, Wallace covers the fundamentals of driving, while also touching on politics, baseball, hockey, philosophy, business, cars, tires and family.

Halfway through the lesson Wallace asks Belal, “How’s your dad doing? Good? Did his health problems get straightened out? On your gas … See the light?”

Certainly it’s a less intimidating environment than the Syrian teenager would have encountered in his hometown of Aleppo, the war-torn city where he lived before his family came to Canada a year and a half ago. Wallace is sensitive to the unique driving challenges they face.

“The people that come out of Aleppo who I teach, the mature people like Jawdat’s dad, they’re looking for the tops of buildings for snipers. They’re looking for IEDs (improvised explosive devices),” he says. “If the road is disturbed they don’t want to go over that section of the road because they figure it might blow up.”

His student, who he notes should be able to pass his driving test after a few more lessons, says driving in Canada is all about following the rules: “In Syria there are no rules.”

A Passionate Approach to Teaching

So why is this veteran driving instructor offering his services free of charge to refugees? Wallace credits his upbringing in Montreal: “My mother was the eldest of 11 kids, right? And she said, ‘Don’t ever refuse somebody who really needs your help.’”

But someone who has known Wallace for 30 years also sees this as the work of a savvy businessman. “I am not going to impugn his motives, but that is a very wise business promotion tactic,” says former Fort St. John mayor Steve Thorlakson, who, along with Wallace, used to hold court for the media at UBCM conventions in the days when they were both involved in municipal politics.

“Everybody down [on the Island] is to the left of Joe Stalin,” Thorlakson says of his perception of B.C.’s capital city. “I genuinely commend him, but I also recognize the cleverness of the business benefits he derives as the result of his not entirely altruistic heart.”

He describes Wallace as bright, articulate, creative and adaptable, “so it doesn’t surprise me that he is doing that with his business in Victoria.”

And there’s no doubt Wallace’s approach is working in what one of Wallace’s mentors, Josie Briton, describes as a fiercely competitive business. Briton is the owner of the North Shore Driving School in North Vancouver and Burnaby. She says Wallace is someone who is “always thinking of progress and touching all parts of the industry. He’s a very, very devoted, very passionate fellow towards driving schools.”

As for Wallace, he notes that his business has taught more than 25,000 people to drive, including the grandchildren of some of his first driving students.

He’s also big on community. His business sponsorships include the Royals and the Grizzlies hockey teams, and the HarbourCats baseball club. A sports fanatic, he’s out almost every night, turning up at baseball, hockey, soccer and lacrosse games. There’s even a small baseball bat tucked down by the seat of his car. It’s just there, Wallace tells me, in case the car is ever immersed in the water and he has to break a window to escape.

At a recent HarbourCats game, I sit next to Rick Town, one of the instructors who works for Wallace and one of his old friends from their days at theUniversity of Manitoba in the early 1970s. Town notes Wallace’s “larger-than-life” personality and his support for the community and sports.

“Every time he walks by any group of people at all, people gravitate towards him and give him high-fives. That type of flamboyance translates into a really caring, giving aspect of his life.”

A flamboyant driving instructor? It hardly fits the stodgy stereotype — that of a middle-aged fellow with a conservative jacket and tie, sitting ramrod straight in the passenger seat, clipboard in hand, unsmiling.

At the HarbourCats game, I notice Wallace is constantly on the go. He starts the evening at the game greeting folks at the gate, then sits behind home plate, moves a few rows back with us for a while and also finds time to work the crowd, burger in hand.

He’s anything but one-dimensional. Case in point: While you’d think a driving instructor might not be a big cycling supporter, John Luton, a long-time cycling advocate and transportation consultant in Victoria, says Wallace is a keen supporter of Bike to Work Week and recreational cycling. In fact, Wallace and Luton have waged annual cyclist-versus-motorist commuting challenges that Wallace writes about in his Times-Colonist column.

“Others have blinders on about cyclists being uniformly scofflaws and parasites on the transportation system, and Steve is much more balanced, so he is refreshing in that respect,” Luton says.

Wallace happily accepts all the compliments. He says he’s doing a lot of things that set his business apart from the pack.

“The key thing with us is the instructors have to be the best in the business,” he tells me in an interview in his downtown Victoria office. “We choose them for success in parallel pursuits.”

Wallace Driving School employs about 15 instructors. One is a former captain in the navy, another is a former deputy police chief, one has a day job as a senior bureaucrat, one was a semi-pro baseball player, another a soccer coach and yet another, like Wallace, is a former municipal politician and UBCM president.

“We want people who have had stellar performances in a related field,” Wallace says.

“They can tailor their instruction to individual students, readily spotting those with special needs. They’re also people who have skin in the game. The majority of our instructors own their own vehicles and they own their own business and they exclusively contract with us.”

An Eye On the Future

Step into the office of Wallace Driving School and you enter a world with some of the latest in driver-training technology. In fact, it’s more a classroom or computer lab than an office.

Wallace’s wife, Joan, a shareholder and adviser, says, “Steve is the strategist. He’s always planning ahead.”

She holds a senior position with the Driving Schools Association of the Americas (something Wallace himself has done in the past), and they attend conventions throughout North America, keeping abreast of the latest innovations.

“Joan is the tactician,” Wallace responds. “She will say, ‘That’s a great idea.’ And I will turn to her and say, ‘How do we do this?’”

Today, Joan demonstrates the “Intoxiclock,” which tells drivers how long it would take to burn off a couple of drinks. There are also simulators that judge drivers’ reaction to hazards on the road. Then there’s the Promethean Board, which projects street scenes from London, Paris, Rome, or, for that matter, downtown Victoria, on a screen so students can plot their moves.

And, of course, there are tests, including Distract-A-Match, a distraction test that requires students to match brightly coloured foam pieces to shapes on a board, without using the same colour twice, and simultaneously counting backwards from 100.

The first time I try it, I fail with flying colours, hesitating 15 times, losing points, finishing with zero. The second time, I try it while wearing “drunk goggles,” which distort the images. This time I actually pick up the pace: “86-85-84-83…” I feel bewildered as I count. “Green twice!” Wallace snaps. “Look at him go. That’s fantastic. You drive better drunk, man!” I still end up with zero.

At the end of my visit, I’m left wondering if I could pass any of these tests or even get a driver’s licence today.

The courses here can cost up to $1,200 for the “full-meal deal,” which is the ICBC Graduated Licensing course that Wallace says is the best in North America. If students fail their driving tests the first time, Wallace takes them in hand and offers more instruction free of charge until they pass.

He says there are still driving schools that have rote instruction. “They don’t teach driving; they teach testing, [they] charge lower rates and don’t offer the Graduated Licensing course.”

The Proof is in the Driving

Ultimately, though, Wallace’s success rests on the success of his students. A few weeks after our interview, he calls me to let me know young Jawdat Belal passed his driving test. He is obviously pleased, having taken the young man under his wing last year.

“He’s very happy,” Wallace says of Belal. “He made only two minor errors. It’s like getting an A-minus on the test.”

How good a driver is Belal? “He’ll be good,” says Wallace. “He’s probably driven illegally in a war zone … So he had all these traits of someone who had been driving illegally because of the nature of where they were.”

Whoever he is teaching, ultimately Wallace says he’s in the business of keeping people alive on the road.

“If you have the most life-threatening activity known to mankind,” he says about driving, “and you have someone who is less than the best to do it, are you out of your mind? Why don’t you just get your dad to do the appendectomy on the kitchen table, or get the knife out and do a root canal for you — because they have about as much expertise doing that as they do teaching driving.”

And with that, he’s off to teach another lesson, a true believer in his mission to make the roads safer for everyone.